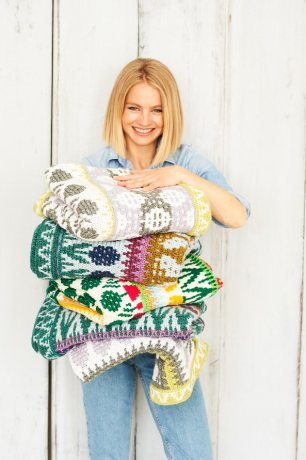 Stylecraft is delighted to be sponsoring the latest Crochet Along from Rosina Plane (Rosina Crochets). Rosina is well-known for her graphic patterns which work particularly well in the mosaic technique, and she is the founding Admin of the popular Facebook group, Mosaic Crochet World.

The CAL, which launches on 23rd July 2021 and comes in seven parts, will be available in three colourways and four different sizes from table runner to a blanket large enough to top a double bed.

The Cottage Garden colourway is in Special DK in a palette of bright and cheerful colours.

City Garden is a sophisticated and muted colourway in Special DK.

Country Garden uses Highland Heathers together with one shade of Life DK.

The blanket, which uses both major forms of Mosaic crochet: inset and overlay; features flowers, trees, fountains and the tile motifs, surrounded by a beautiful graphic border.

“The design is an evolution of my 2020 winter CAL called Letitia’s Holiday, which was named after a friend of mine who always loved Christmas,” she explains.” It included candles, baubles and gingerbread men but I wanted to broaden the appeal of the motifs, so they weren’t just Christmas related.” Letitia’s Garden uses the same stitch repeats as Letitia’s Holiday, so all motifs can be interchanged between the two designs to make your own unique blanket masterpiece.

The pattern for Letitia’s Garden is available from Rosina’s Ravelry store priced at £7.95 but it will be half price until the end of August. Rosina has also made some very helpful videos to accompany the CAL which will be added to her YouTube channel as each part of the CAL is released.

The CAL will be hosted in Rosina’s Facebook group Rosina Crochets.