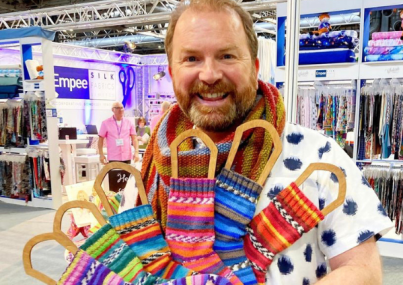 Stylecraft is delighted to announce that Stuart Hillard has joined the ranks of their celebrated Blogstars.

Stuart is a knitter, sewer, TV presenter, author, columnist, and designer who has worked in the creative industries for over 20 years but achieved ‘overnight success’ when he appeared in the first series of The Great British Sewing Bee on BBC and went on to co-present the first Christmas Special.

A knitter almost from birth, Stuart learned to cast on, knit, and purl when he was 4 years old. His mother got the peace and quiet she craved, and Stuart’s Action Man got a rather fetching knitted maxi dress. He’s been pushing boundaries ever since, most recently with a range of sock yarns he designed for Stylecraft called ‘Colours of the World’ (stripe up your life!) inspired by his world travels and love of colour.

Since his time on the Bee, Stuart has worked full-time in the creative industry, writing four best-selling craft books including his latest, Bags for Life which was awarded best sewing book of 2022 in the Creative Book Awards. He is currently working on two new books to be published over the next couple of years.

Stuart is a presenter on the TV shopping channel Sewing Street, and he is also a regular guest designer for both sew and knit projects. He designs three fabric collections each year and is most at home playing with colour and pattern. When he isn’t doing any of this, he is farming sheep, goats, and chickens in North Yorkshire with his husband of 19 years, Charlie.