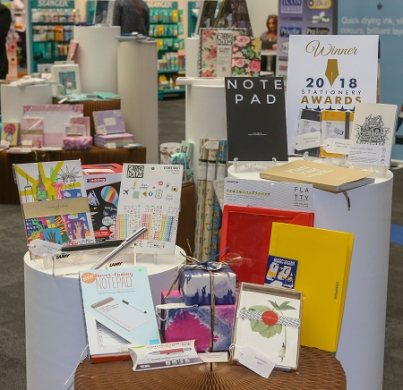 The prestigious annual Stationery Awards have been expanded to include new Retailer Categories and a ‘Stationery Designer of the Year’ category for the first time.

In the Retailer Categories both specialist retailers and those who sell stationery as part of their offer are eligible for the five honours, designed to recognise and benchmark good practice and innovation in the retail sector.

All entries should relate to the past year of trading, from January 2018 to January 2019, with an online entry form to be completed by February 15 at www.stationeryawards.co.uk

Retailers can enter themselves or be nominated by agents, account managers or suppliers and can enter as many categories as they wish.

Fieldwick added: “The entry forms are very straightforward, and we would encourage everyone to upload photos and POS images etc to support their entries. So, dig out those photos you took of things that worked well in your stationery department, window or shop last year and over Christmas and get your entry forms done.”

The Awards have also introduced a new ‘Stationery Designer of the Year’ category, sponsored by UK manufacturer GO Stationery. Entrants into this category will be competing to work with the experienced production and sales team at GO Stationery to see their ideas taken into production and sold out to retailers throughout the UK. Entries for this category need to be for February 28.

In addition, the Stationery Awards are now open for all stationery suppliers to enter, not just those exhibiting at Stationery Show London as previously. Suppliers have until March 29 to enter.

Relevant industry judges will assess the different categories, with the finalists in each category being announced ahead of the show.

The winners will be then revealed at an Awards Ceremony taking place on the first evening of Stationery Show London, which runs over Tuesday and Wednesday, April 30-May 1, at the Business Design Centre in Islington.