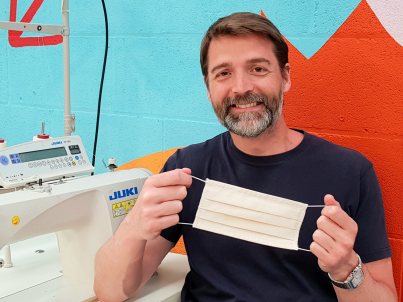 Manchester-based integrated agency Social has been appointed to lead a national campaign with the fashion designer and BBC’s Great British Sewing Bee judge, Patrick Grant, to encourage sewers to make face coverings for their community.

Following a launch on BBC’s The One Show, and with a campaign website providing how-to videos, sewing patterns and links to local sewing groups, there has been a remarkable response from sewing machinists across the UK.

“The #BigCommunitySew hashtag tells an incredible story of people being inspired to get out their sewing machines,” explained Manchester Director Diana MacCarthy. “We’ve seen notes pushed through neighbours’ doors asking if people want face coverings and sewing groups everywhere reaching out to friends, family and community groups to ensure everyone has a face covering.

“As we cautiously begin the slow steps to creating an environment where we can ease restrictions, this campaign is helping Britain make a significant cultural shift where face coverings will become the new norm – and we’re really proud to have led the communications to drive it.”

Commenting on the success of the campaign, Patrick Grant said Social had been an agile and effective partner that understood how to run community-led campaigns.“It’s been great working with Social. They responded quickly and immediately understood what we were trying to achieve,” he said. “Their creative skills added real value and helped us get off to a flying start.”

The campaign has been backed by the government with Michael Gove, The Chancellor of the Duchy of Lancaster, calling it a “wonderful example of communities across the United Kingdom coming together to do their bit in the national effort”. It is continuing to seek partnerships to help normalise the wearing of face coverings and ensure every community has enough to help limit the spread of the virus.

It’s estimated that more than 100,000 face coverings have been distributed in the first week across England, Wales, Scotland and Northern Ireland – with some home sewers making over 1,000 each. More than 130,000 people have visited the campaign website and more than 50 sewing groups have pledged their support.