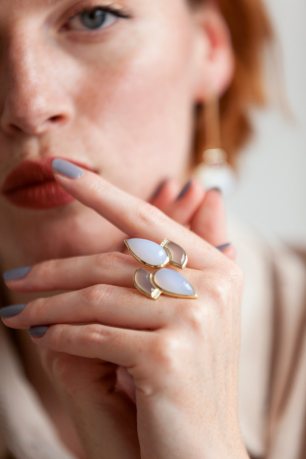 The final four jewellers must now face a panel of industry experts to secure a place at the boutique London jewellery show on October 11th & 12th, 2020

The Jewellery Cut Live in association with Fuli Gemstones has announced the four designers shortlisted for its bi-annual bursary.

This season, the four designers to have made it through to the second round of judging are: Holly O’Hanlon, Jasmine Ataullah, KAB Jewellery and Kathy Kraus.

These designers were picked by The Jewellery Cut team from a wealth of high-quality entries for this season’s prize – applications were open to all UK-based jewellers who have been in business for three years or less. The shortlist must now face a panel of expert judges and present their work to secure a free place at The Jewellery Cut Live in association with Fuli Gemstones this October. Only one will make it through.

“We had a huge number of very thoughtful entries from high-quality jewellers this season, and it was a tough task to whittle them down to the final four, but we are so pleased to have selected Holly O’Hanlon, Jasmine Ataullah, KAB Jewellery and Kathy Kraus,” said The Jewellery Cut co-founder Rachael Taylor. “In-keeping with the spirit of our show, each jeweller brings something different to the table, so I’m excited to see what our judges will make of their work. This is the first time that we have introduced an external judging panel to our bursary and we feel that it adds an extra element to the process, as all four shortlisted designers will be able to show their work to these incredible judges, which is something I know many established jewellers would love to have the opportunity to do.”

Judging is due to take place in London this week, and the winner will be announced next week. As well as winning a place at the jewellery selling exhibition, the winning jeweller will also receive a Fuli Gemstones peridot and a host of other prizes generously donated by De Beers, Retail Jeweller magazine, The National Association of Jewellers, Goldsmiths’ Fair, Honest PR and The Goldsmiths’ Company Assay Office. See below for full list of benefits.

The next edition of The Jewellery Cut Live in association with Fuli Gemstones will take place on the 11th & 12th of October, 2020, at The Royal Institution on Albermarle Street in London’s Mayfair.

Breakdown of the Benefits Included in the Jewellery Cut Live Bursary