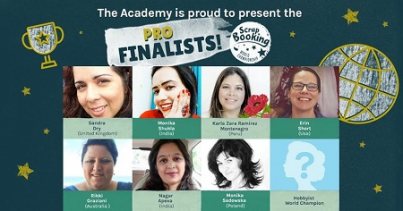 The Scrapbooking World Championship finalists have been selected.

The World Champions of the two Divisions will be announced by The Academy of Scrapbooking and Arts on February 14.

At the end of the continental voting phase, where the 63 competing projects have collected a total of over 2,000 votes from the Official Stores, the competitors themselves, the ambassadors, the academic committee and social friends, the competitors who have gained access to the finals have been named.

1st North America: Erin Short – project: “The best is yet to be scrapbook” - Usa

The voting to determine world champions is going to be held in two phases. The first one is from February 6-8 where all registered competitors who are not in the race will be able to vote for their

colleagues, the second phase involves the Academy Committee only for a more technical and accurate evaluation of each individual project.

The historic moment when the Academy is going to announce the first Scrapbooking World Champions is Thursday, February 14.

The Academy has decided to award a special prize to the most social project.

The Italian Valentina Porceddu reached this prestigious goal by involving the highest number of friends.

She receives the official apron of the 1st World Championship as a special prize.

The Pro World Champion and the Hobbyist World Champion will have the honour of receiving a Busto and Sun hat, each one designed exclusively for the Academy and customized by the winner.

Busto and Sun is a bespoke hatmaker based in Topanga Canyon, California.