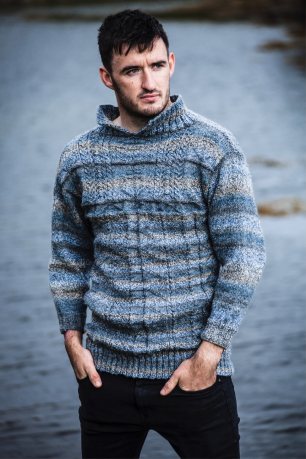 A small Hebridean clothing company whose workforce is made up of skilled knitters and craftspeople is ensuring that an age-old tradition, which was starting to fade into the mists of time, is kept alive.

Isle-of-Barra based Herring Girl Knitwear – which is marking one year since its launch – is using the unique patterns and styles first developed during the late 19thand early 20th centuries by the formidable band of women known as ‘Herring Girls’, who followed the shoals of herring around the British coast. The women were employed in the gruelling work of gutting and curing the fish for the merchants. They came from all over the country and often spent months away from home.

Despite the hard work and poor living conditions, these women were standard bearers for the culture and traditions of their communities. Their time off would be spent talking, singing and knitting. Their knitting would use skills and patterns handed down over generations and learned as they grew up. Very often their completed garments would be sent home for family members to wear.

The patterns would often include designs such as anchors, ship’s wheels, hearts or marriage lines – each with a distinct connection to their own home islands and the fishing industry. The pattern unique to the Barra fishermen’s guernsey (jumper) is the True Lovers Knot.

The Herring Girl knitwear range is inspired by these hardworking women and is using the official fishing port registrations to signify which community the patterns relate to. The first Herring Girl range has used the ‘CY’ mark, which represents the fishing port of Castlebay on Barra. They are also currently crafting garments under the registrations of ‘SY’ for Stornoway on the Isle of Lewis and ‘BRD’ for Broadford on the Isle of Skye. All of their products are available to purchase through their website www.herringgirlcollection.com or via their retail stockists and can be made to order.

Another unique quirk of Herring Girl brand is that the knitters are not known to the purchaser by their name – instead each knitter chooses the name and registration number of a fishing boat which is historically linked to that community.

Herring Girl founder and designer, Margaret Anne Elder – known as ‘CY Grian nan Oir’ to her customers - said: “l watched my grandmother knitting every moment of the day. Often, when she walked from her home village to the shop or post office she could knit one sock there and one on the way back. Anyone who remembers her will always talk of her knitting.

“For many years I’ve been determined to bring the story of the Herring Girls to life in some way, to honour those brave girls and women who had such a hard life and spent their time off creating such gorgeous gifts for their families. And what better way to do that than recreate the beautiful patterns which have such a strong cultural link to both past and present Hebridean communities. Each pattern has a story that relates to our island heritage and I am proud to ensure those patterns and styles live on and can be passed onto future generations.

“The history of patterns is fascinating, with each island having its own identifiers. If you met a fisherman wearing a handknitted guernsey you’d be able to tell his home port just by looking at the pattern. As well as remaining true to the unique designs, our hand knitters remain true to the colours used by our forebears with the traditional, greens, blues and browns forming the basis of the range.”

Margaret Anne added: “At the moment, I have five experienced knitters supplying quality garments for Herring Girl. However, I am very keen to make sure these skills and patterns are handed on, just as they were to me. I will be looking to recruit more younger knitters who are willing to learn the craft and history so it can be passed on to the next generation of knitters. And in these times, knitting is a therapeutic pastime which can provide a calming distraction to all that is going on around us.

“In island culture, the herring girl is viewed as a hardworking, strong woman who was not scared of hard graft. I hope, through the Herring Girl Collection, we can pay tribute to their resilience and thank them for keeping these unique traditions alive for us to take on.”

One of Herring Girl Collection’s band of knitters known as ‘CY42 Venus’ added: “My granny taught us to knit when we were young, she was always knitting. It was a skill that she was determined we would grow up with just as she had and I’m incredibly proud that I am able to keep the tradition going. She is my inspiration every time I pick up my knitting needles.”