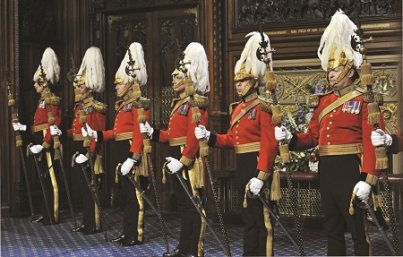 London-based embroidery atelier Hand & Lock have been granted the honour of a Royal Warrant by Her Majesty Queen Elizabeth II.

A Royal Warrant of Appointment is granted as a mark of recognition to people or companies who have regularly supplied goods or services to HM The Queen, HRH The Duke of Edinburgh or HRH The Prince of Wales or their households.

The prestigious embroidery house was founded in 1767 and has supplied numerous royal households over its long history. This new royal warrant is the first the company has held since M. Hand Ltd and S. Lock & Co merged in 2001. The previous warrant had been held by S. Lock Ltd for embroidery services for the senior Royals.

Jessica Jane Pile, company director, said: “The staff of Hand & Lock are all delighted to have their craft recognised by Her Majesty the Queen. The specific project we have been working on has been a source of great pride.”

The new warrant recognises the work Hand & Lock have done for the Royal household over the last decade. This includes the company’s work on the uniforms of Her Majesty’s Body Guard of the Honourable Corps of Gentlemen at Arms. Hand & Lock embroidery can be witnessed first hand at ceremonial occasions where these key members of the Royal entourage are dressed in full regalia.

Since 2012 elaborate golden epaulettes, waist sashes, pouches, collars, cuffs and back skirts have been hand embroidered and supplied to the palace.

The first Royal Warrants were issued in the 15th Century with one of the first recipients being William Caxton the inventor of the printing press. Later, Queen Victoria popularised the practice issuing over 1,000 Royal Warrants during her 54-year reign. Now the Royal Warrant holders include companies as diverse as Burberry Clothing, Cadbury Chocolates and Jaguar Landrover.

For the embroidery house’s 250th anniversary 13 one-of-a-kind bags were embroidered in collaboration with top British and international designers. The bags were then auctioned in association with Sotheby’s with all the proceeds going to QEST, to support the next generation of crafts men and women.