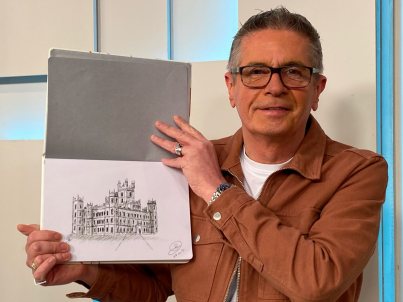 Create and Craft TV presenter Dave Bradford’s discovery of his hidden sketching talent in lockdown has inspired him to launch a new fundraising initiative in aid of NHS Charities Together, selling prints of his first sketch – Highclere Castle, the setting for TV’s popular Downton Abbey show.

Despite never sketching at all until last autumn, Dave’s Facebook posts of his Downton Abbey artwork prompted so many positive comments, he was inspired to put his talents to good use and raise money for charity.

Downton Abbey’s leading man Hugh Bonneville has lent his backing to the fundraiser and signed the original print, which will be auctioned once the prints have been sold.

Copies of Dave’s personally-signed Downton Abbey print will go on sale on the Create and Craft TV channel and website from Saturday 13th February with all proceeds going to the charity, NHS Charities Together. The money donated from the sales will be used to support the 241 NHS member charities on the ground across the UK, helping to address the immediate needs of patients and staff and to support the longer-term recovery of the NHS.

Dave Bradford commented: “Like many people, I decided to take up a new hobby in lockdown and I was inspired to pick up a pen by guest presenter Sandra Rushton. While I’ve been into constructing models for a while, sketching is totally new to me and it goes to prove that anyone can be creative if they’ve got the time and inclination. I’ve been blown away by the amazing response to my sketch and the support I’ve received for the fundraising initiative from my followers, fans and of course Hugh Bonneville. I’m really hoping that through the sales and the auction, we can raise as much as possible to help our NHS heroes at this very challenging time.”

Ellie Orton, Chief Executive of NHS Charities Together said: “We’re so thankful to Dave for using his new-found talent to support us in this way. Donations mean the health service can go above and beyond what would otherwise be possible. Through our member charities, spanning the UK, we fund projects that improve services for patients and help NHS staff and volunteers both practically and emotionally so that they can continue with their vital life-saving work.”

While Create and Craft was founded as a live TV channel, the brand has more recently been experiencing growth online as it broadcasts to a large audience on its social media channels including YouTube and Instagram.

Dave’s prints of Downton Abbey are priced at £9.99 (plus £2.99 P&P) and will be sold on Create and Craft from Saturday 13th February. 100% of the retail price (excl VAT) will go to NHS Charities Together, excluding P&P.