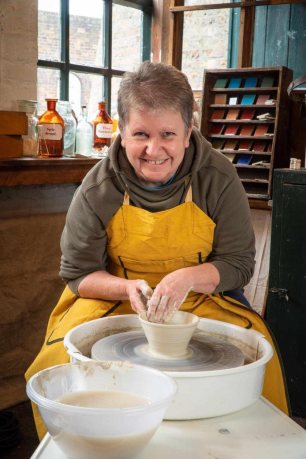 Sally Tully, graduate of Applied Arts, appeared on the programme shown on Channel 4, exhibiting her skills as a ceramicist

The Great Pottery Throw Down is a British TV competition aired on Channel 4, where potters from across the UK battle it out to be named the best potter in the country. Similar to the style of other TV shows such as The Great British Bake Off or The Great British Sewing Bee, instead of baking or sewing, it focuses on the art of pottery and ceramics.

Potters are set a number of tasks testing their skill both at the wheel and with different techniques such as handbuilding, glazing, slipcasting, raku and more. Each week they have to create the ‘Main Make’, which sees the potters produce an ambitious piece from slabs of clay to glazed glory, with each episode culminating in the reveal of the Main Make, which potters present straight from the kiln for judging. With Siobhán McSweeny playing host, contestants are judged by potter and ceramics designer Keith Brymer Jones and potter ‘kiln man Rich’ Richard Miller, with contestants failing to impress leaving the studio until the final, when one potter proves themselves to be master of the clay.

“Once successful, you’re then driven up to Stoke on Trent, where we were given a rented hunting lodge out in the middle of nowhere as our accommodation. The setting was beautiful. After we had settled in, we were given a tour of the pottery studios, but it wasn’t long before we were potting! They’re very gruelling days, you’re up very early and the days are long. When there were 12 of us, right at the beginning, the judging process took five hours! It’s incredible they cut it down to just 10 minutes on the TV. You get such great feedback though, it’s so worth it. They don’t just say ‘that’s nice’ and move on, they talk in depth about your piece and the construction methods.

“You end up immersing yourself with all the other contestants. You’re around one another 24/7, eating meals together, spending every waking moment together. We would give each other lessons. The best part of the experience for me was the fact I’ve walked away with 11 new friends. Although I must say getting Potter of the Week on the first week was a highlight. You never expect that in the first week, I was completely stunned and taken aback.”

Despite calling potters ‘mudslingers’ back when Sally was a student, she now admits to being at her happiest when she’s in a ‘t-shirt, jeans and covered in mud’. This love for getting muddy is reflected in her ceramics and led her to the BA Applied Arts (now named BA (Hons) Craft & Material Practices) course at Plymouth College of Art.

Sally said, “I never intended to study ceramics at Plymouth College of Art, it really happened by accident. I accompanied my partner Hazel to some evening pottery classes, after she was inspired to try it when we’d visited a craft fair in Plymouth. I was in my 30s at the time and I’d originally studied graphic design. I didn’t want to go, but I said okay, I’ll do the first term then dip out. Seven years and two evening classes a year later, Dan Chapple, Technical Demonstrator in Ceramics at the college said, why don’t you just do a degree? So that’s when I applied to the Applied Arts course and never looked back. If anyone asks me where to learn art, I always suggest Plymouth College of Art.”

Sally, based in Ashton, west Cornwall said, “I applied using the application form that comes out every year and if you’re successful at that stage, the show will phone you and ask some questions about how much you pot and what techniques you use. Due to Covid, we weren’t able to be interviewed in person in London, so we had to do them online. They send you a bag of clay that you cut sizes out of, weigh them, then you are asked to do a variety of different challenges. I ended up having to bring my wheel into my kitchen as I don’t get any internet in my studio in the garden. It took me days to clean up!

Described as ‘brilliant’ and ‘fantastic’ by the judges on the show, 58 year old Sally, who lives in Cornwall, uses a variety of techniques, such as pit, smoke fired pottery and raku or ‘slip resist’ glazing, creating a unique texture on each pot.

Sourcing plant material such as seaweed or feathers from the beach and moorland near her home, Sally surrounds the pots with these objects while still red hot from the kiln, allowing the materials to impart their mineral content onto the surface in a natural and uncontrived way, creating unexpected patterns and colours on the final piece. Ideas forged from the stunning Cornish landscape have been utilised to become a part of each piece of her work.

Sally said, “I’m just a person that loves making pots and I’m lucky enough that people want to buy them! I never make the same thing twice, even my mugs are mismatched. Every pot I make is individual. As long as people are willing to buy them from me, I’m willing to make them.”

“I’ve taken a bit of a leap since finishing the show, I’ve quit my job and I’ve got a new studio at Roskilly’s Dairy Farm in St Keverne, Cornwall, where I’ll be hosting workshops. I’ve got workshops to suit every budget from half days all the way up to three day events. I figure I’ve got twenty years of pottery knowledge in my head, there’s no use keeping all this information to myself. That’s one of the best things about the Great Pottery Throw Down, the sharing of knowledge. I don’t see the point of acquiring knowledge if you don’t share it, that way nothing gets better and nothing changes. If I do something by accident, I tell everyone about it. Even if they copy me, they won’t do it the same as me. Potters are so close to immortality, in 10,000 years, they’ll be digging up our pots.”


You can watch The Great Pottery Throw Down on Channel 4’s on demand service All4. You can keep up to date with Sally’s work through her website or Instagram page @sally.tully