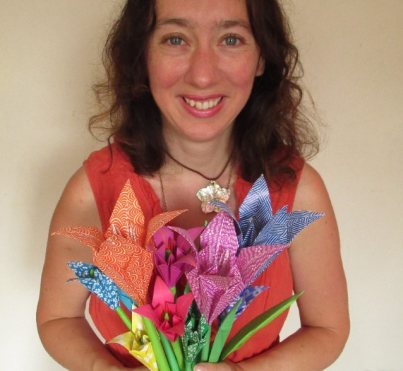 A group in Oxford which uses the ancient Japanese art of origami to help those experiencing anxiety and other mental health problems is celebrating after receiving a £10,000 grant from The National Lottery Community Fund.

Origami Pulse CIC was launched in 2017 by Dr Lizzie Burns with Zulay Newell and Angela Loveridge to help people looking for ways to counter feelings of stress and anxiety as well as well as learn a creative new skill. After hosting regular workshops at Oxfordshire County Library, it has since risen to the challenge of the pandemic by growing its virtual origami groups online.

Lizzie, who also works within Oncology at University College Hospital, was first taught origami by a patient being treated for cancer, who asked her to pass on her newfound hobby as a way of helping others.

She now plans to use the grant, raised by National Lottery Players, to fund the ‘We Can Origami’ project, which targets young people who have been affected by the pandemic by offering free family workshops in schools and libraries.

It’s just one of 571 projects in the South East that have been awarded a total of over £28 million of funding so far this year by The National Lottery Community Fund, the largest funder of community activity in the UK.

Across England, almost £200 million has been shared out among more than 4,500 projects already this year.

Lizzie says: “We are absolutely overjoyed about ‘We can origami’, which is a project we care so much about. We’ve felt concerned for children and young people over this period and wanted to bring back a sense of fun and creativity, with positive sessions that help create happy memories for children and their families.”

Origami Pulse has kept its services running over the last year by hosting virtual workshops and posting out activity packs, and has helped a range of people impacted by the COVID-19 pandemic, including those experiencing bereavement and even nurses serving on the front line.

Sarah Saunders, a Nurse practising at John Radcliffe Hospital, contacted Lizzie after working with her to help patients as part of the hospital’s Artlink programme, funded by Oxford Hospitals Charity.

During COVID-19 Sarah’s focus shifted away from supporting not only patients, but also the wellbeing of colleagues. Sarah formed an online group with her colleagues as a way to come together and de-stress during the darkest days of the pandemic.

She says: “Origami was a moment of calm for us in what felt like a very uncertain world.

It was permission to forget COVID for a few moments. There was comfort in knowing we were offering everyone the chance to unwind for a moment. It was a way of providing support without having to necessarily talk about the things that were really hard to talk about.

“We are all very grateful for the support that Lizzie and Origami Pulse have offered us during some very dark months.”

Lizzie, who also runs sessions in Merseyside thanks to business partner Zulay Newell, also plans to use the grant to extend her online sessions and create more origami kits to be used as part of community pastoral care.

She says: “We are so grateful to the National Lottery and National Lottery Players for supporting our work as it allows us to offer help to vulnerable groups during this difficult time. We now aim to inspire more people like Sarah and her colleagues, as well as more young people and their families, and provide the feeling of calm and the sense of achievement that the simple act of paper folding can provide.”

Helen Bushell, Senior Head of Regional Funding for London, South East and East of England at The National Lottery Community Fund, said: “I am incredibly proud to see the amazing impact that money raised by National Lottery players is having in communities across the South East.

“The pandemic has shone a light on the inspiring volunteers and groups, like Origami Pulse, who have been dedicated to helping their communities thrive, as well as address some of the impacts that the last 12 months have had on our collective mental health.”

Over eight in ten (83%) grants are for under £10,000 – going to grassroots groups and charities across the UK that are bringing to life amazing projects that matter to their communities.

To find out more visit www.TNLCommunityFund.org.uk