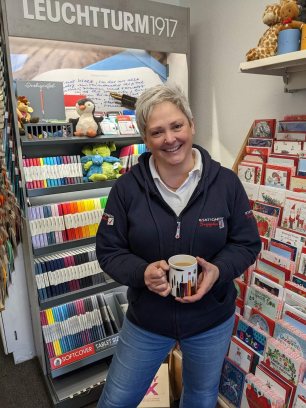 This year sees self-proclaimed “stationery geek” Sarah Laker, take the reins, “It’s my favourite week of the year and I’ve taken part in it since the beginning, so I’m beyond delighted to be asked to spearhead this year’s National Stationery Week campaign. I’ve got lots of ideas so follow us on social media and spread the stationery love!”

With a renewed focus on solidifying the bonds between retailers and the amazing stationery brands they stock, as well as the customers they serve, National Stationery Week is set to be a real hit for all involved. The campaign was born out of London Stationery Show trade exhibition, which is organised by events and publishing team Ocean Media Group. This year, the national initiative is also undergoing a re-brand, which both Ocean Media and Sarah Laker expect to drum up even more enthusiasm from suppliers, retailers and consumers. Taking place between the 15-23 May 2023, National Stationery Week will see the return of daily hashtags to engage the end consumer. Whether it be letter writing, journaling, or arts and crafts, National Stationery Week will celebrate it.

Alex Butler, Event Director of London Stationery Show says, “It’s one of the best weeks of the year for both stationery lovers and professionals. The industry’s only event dedicated to stationery takes place on 16-17 May 2023 at the Business Design Centre, so whilst the consumer gets excited about current products, retailers will get a first look at the brand-new offerings from the industry’s biggest names at the show.”

To discuss sponsorship opportunities and how to get involved in this year’s National Stationery Week, contact Sarah Laker on sarah@marplestationerysupplies.co.uk.