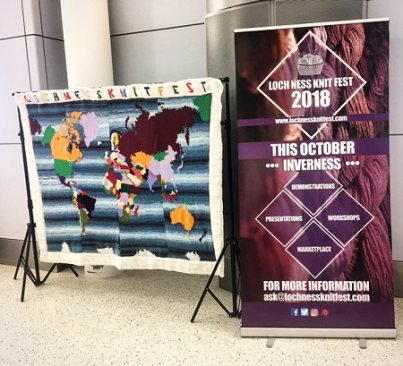 Inverness Airport is expecting to see lots of visitors flying into the area during the month of October as knitters venture to the Highlands of Scotland for Loch Ness Knit Fest 2018.

International and domestic passengers arriving into Inverness are in for a treat as both Loganair and Inverness Airport have embraced the woolly wonder of Loch Ness Knit Fest with yarn-storming of the Loganair check-in area and the display of a carefully hand-crafted world map.

Cecilia Grigor, director at Loch Ness Knit Fest, said: “We’re completely overwhelmed by the reaction we’ve had from people abroad who are tuning in to our pre festival news in 2018. The number of international visitors coming to the area for Loch Ness Knit Fest is increasing year on year and to give you an idea of the breadth of nationalities taking part, there’ll be over 19 countries represented ranging from New Zealand to Alaska, Iceland, Scandinavia and the USA to name a few.

“We felt that the knitted world map would be a wonderful way to show the international element of the event. It’s designed and positioned in the airport to engage minds and spark intrigue.

“We’d seen first hand how people can connect through their mutual love of craft and we’re so fortunate to have such a rich textile heritage here in the Highlands to share with visitors from near and far. Forget the language barriers and cultural differences, with yarn and needles, people are completely united on the knitting front.”

Joyce Rawlinson and Hampshire based, Bramley Knitters, have supported Loch Ness Knit Fest from the very beginning in 2016. This creative group have volunteered to create some head-turning pieces such as a giant knitted Loch Ness Monster, 3D knitted Inverness Castle that’s currently on display in the Victorian Market and the technical knitted map which is on show for the next two weeks ahead of the 2018 event.

Joyce said: “I love to knit and although the world map was quite a complicated piece to complete due to the scale. The original pattern for the map took ages to find and came from Denmark. I altered it to make the map, each panel took about three weeks knitting. At one point, when knitting Africa, I had at least nine different balls of wool on the needle! It was great fun and we were pleased with the finished result.

“I’m attending Loch Ness Knit Fest with our group from Hampshire and we can’t wait to meet reconnect with old friends, meet new people, share knitting skills and ideas as well as gaining some inspiration for our next knitted installation.”

The teacher line-up is a real draw, including: