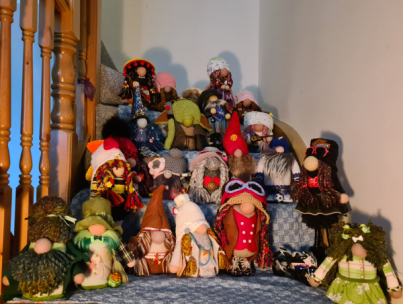 Having moved from New York to Scotland just before lockdown, Adi Mohan started making gnomes simply as a hobby to create her own magical world called Gnomadica, and a family away from home. However, within just six months, this crafting hobby is now a fully-fledged successful business, loved by a community of collectors and clients as far-flung as America.

Originally from India, Adi moved to New York in 2000 to work as an interior designer, before meeting her husband and relocating to Cambuslang near Glasgow. When lockdown hit, Adi explored her artistic side, from painting and jewellery making to polymer clay sculpting. However, she found her true passion was in creating gnomes and their individual, playful characters.

Initially, Adi made the gnomes for herself to have peeking around pots at home, but as more and more friends asked for her creations, she realised the potential for a commercial business. Through Instagram, Adi was able to connect with a much larger community of craft lovers and gnome collectors, including further afield customers reaching as far as the USA.

All of the gnomes are completely handmade and take on average 3-4 hours to make, ranging from polymer clay ones that are as small as 7.5cm to plush ones ranging from about 12cm high to some that are taller than 30cm. Adi initially used YouTube videos to learn the crafting process, and since creating her first gnome using a tin can as the frame, has developed her own unique technique and style.

The creations start with the base which will usually depend on whether the gnome is sitting or standing, using either wood or Styrofoam depending on its posture. The gnomes are dressed in fabric and filled with poly pellets and polyfill stuffing, with over 150 varieties available on the website from seasonal gnomes and sports playing gnomes, to movie novelty gnomes and even biker gnomes.

Commenting on what Adi gets out of crafting, she says, “I do have a very strong artistic streak and I think lockdown really brought that out when I was looking for a release to help me stay collected and calm because obviously, it was a big life change for me.

“The life in New York is very bustling and then coming here, almost immediately lockdown happened, so I was in a place that’s beautiful but like everyone, I was trapped indoors. These gnomes have so many characters, it’s like meeting and making new friends on a daily basis, it was my own little world. Plus, now with it being my full-time career I can proudly say I never have a miserable day at work, not when I’m crafting.”

Discussing the future of Gnomadica, Adi says, “On our website, we have a map of Gnomadica and each gnome has a house or a shop or a connection to their own place, and the early ones have their own backstory which are all on there too. In the future, we’re hoping that we’ll be able to expand into subscriptions or maybe even a video game on the website.

“I want people to see gnomes as more than just Christmas gifts or decorations because we have gnomes for every festival including Easter, Valentine’s, and Halloween, so they’re all-year round magic, something to make you smile.” See her collection at gnomadica.com and on Instagram @adis_gnome_factory