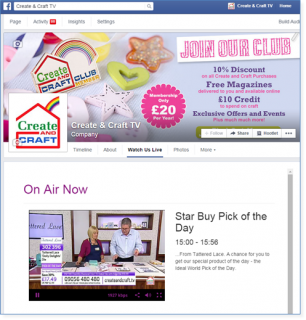 In a world first, Create and Craft TV has announced that it is now streaming their hugely successful TV channel live on Facebook.

In a true omni-channel approach, Create and Craft TV are now giving their Facebook followers and their viewers the opportunity to not only watch their shows live on the social media platform, but are also able to purchase the products on the live shows directly from the Facebook page.

In the UK around 24 million people use Facebook every day, spending roughly 21 minutes on the site throughout the day. With just over 18 million women in the UK doing some kind of craft and a 12% increase in the last two years, there is a real appetite for knowledge, inspiration and product in crafting.

Michael O’Connor, head of marketing communications, said: “Being able to tune into our channel through their favourite social site is a great opportunity for our Facebook followers and customers. Our crafting community love to add their makes to Facebook, chat and exchange ideas with fellow crafters so it makes sense that they can also watch the shows at the same time. As a brand, we listen closely to our customers on Facebook and, because we broadcast live, are able to relay their comments within minutes straight to the show where the presenter will mention this on air.”

Create and Craft TV broadcasts 24 hours a day on Freeview and Sky in the UK, with shows that both educate and inspire crafters across a range of craft categories such as paper crafting, cake decorating, sewing, knitting and jewellery making. They sell a wide range of exclusive products from sewing machines to fabric, paper and cards.

Larry Eeles, ecommerce development manager, said: “We worked closely with our broadcast partners to achieve a seamless viewing and buying experience, which we’ve now got with the world’s biggest social network. You can view the live channel through Facebook on a desktop and we’ll be working closely with their developers to get this onto Mobile and Tablet in the near future”.