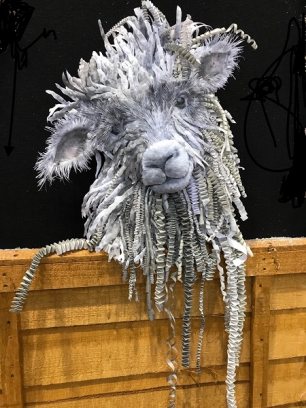 Next August, thousands of knitting, needlework and craft enthusiasts are expected to descend upon Dundee for the first EWEfest – Scotland’s National Wool Festival.

EweFest founder Elena Costella revealed that the two-day event will be held in Dundee’s Slessor Gardens on August 16-17, 2019.

Elena, who is a renowned hand-knitting designer, said: “EWEfest will be a celebration of textiles and crafts, with a strong focus on wool in all its stages – scouring, carding, dying, spinning, felting, weaving and knitting.”

EWEfest 2019 has already attracted international interest and the two-day programme will feature demonstrations by world-leading hand-knitting designers, a fabulous fashion show previewing Rowan’s winter 2019 collection and expert-led workshops in the stunning setting of V&A Dundee, Scotland’s first Museum of Design. However, the stars of the festival will undoubtedly be of the four-legged variety, with sheep, alpacas, chinchilla rabbits and angora goats taking pride of place in their own special EWEbaaazaar.

Elena added: “This two-day festival will be a huge love-in of all things woolly – not forgetting all other natural fibres. The main marquee will be a cornucopia of delights for knitters, needleworkers and crafters, with goodies such as hand-dyed wool, wool tops, dye for wool, patterns and all manner of equipment.”

Elena revealed that EWEfest 2019 will also feature EWEmarket, a traditional outdoor market showcasing the very best handmade items from artisans, both local and from further afield.

Elena said: “In EWEniversal Trade Centre, EWEfest’s main marquee, Scotland’s knitters, needleworkers and crafters will be inspired, learn new techniques and pick up tips. In addition, this new and exciting event will also be a wonderful opportunity for wool, textile and craft suppliers to meet thousands of potential customers from all over the Scotland – and beyond.”

To celebrate the first EWEfest, on the Friday evening, there’ll be a special event with live music, a gin bar and street food for ticket holders and stall holders.

“Scotland has a long tradition of knitting - and of partying,” Elena said. “We’re looking forward to combining the two at the end of EWEfest 2019’s opening day, which we’re thinking of as EWEfest’s M&Ms – Meet and Mingle!”

For more information about EWEfest 2019, including buying tickets and reserving a stall in either the EWEniversal Trade Centre or Ewemarket, visit http://ewe.scot