Canines Top the List of Things Brits Are Trying to Draw 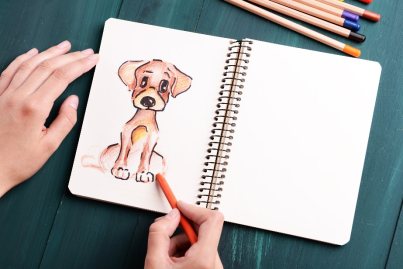 Dogs are the UK’s most popular art subject, new research has revealed. The analysis of Google search data by creative resource Design Bundles found that “dog” was the most common ending of searches starting “how to draw”. Canines topped the chart with an average of 11,000 searches per month over the past year, offering further evidence that dogs really are man’s best friend. In second place was “a rose” with 9,300 monthly searches, while in third was “a face” with 7,600 inquiries each month. Ranking in fourth place among searches by Brits was “how to draw anime”, the popular Japanese style of art. Anime also ranked as the most popular “how to draw…” search globally, receiving 76,000 searches around the world each month.

The second most popular global searches are for how to draw a dog, and how to draw a rose, which are both searched on average 68,000 times each month. The fourth most common search globally is for how to draw a dragon, which ranks in fifth place among British searches. Also featuring in the top ten UK searches are cats in sixth, followed by lips, hair, eyes and nose from seventh to tenth. The study analysed seven other major English-speaking countries, with anime topping the rankings in the USA, followed by dragons and a rose, leaving dogs in fourth place among Americans. Ireland and South Africa both share the same top two as the UK – dogs in first, followed by roses. The third most popular search in Ireland is “how to draw a unicorn”, while in South Africa it is “how to draw Goku”, referring to the main character from the Japanese manga comic “Dragon Ball”. Canadians, Australians and New Zealanders are united in their desire to draw dragons, with searches for the mythical creature topping the rankings in all three countries. India’s most searched drawing subject is “a girl”, followed by “a rose” in second, and “a dog” in third. The country’s fourth and fifth most popular “how to draw” ending is “peacock”.

A spokesperson for Design Bundles, which conducted the study, said: “It’s fascinating to see the different things we are all trying to draw around the world. There are some clear themes, with dogs and roses in all eight countries’ top five, with dragons also particularly popular. However anime has clearly captured the imagination of millions as it receives the most searches globally.”