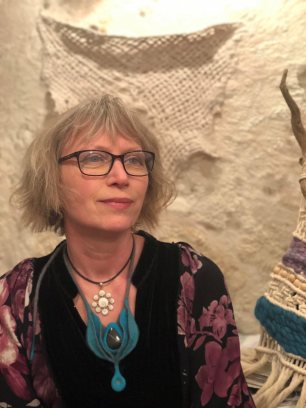 The long road to achieving a life’s dream has kept the health and wellbeing of a member of staff at the University of Chester ‘buoyant’ in the face of numerous serious health challenges.

Georgina Spry, who is a Senior Lecturer and Founding Fellow of the Chartered College of Teaching in the Faculty of Education and Children’s Services, has been awarded her EdD after diligently pursuing her studies with a thesis entitled ‘A New Felt Presence: Making and Learning as Part of a Community of Women Feltmakers’ over nine years, despite numerous setbacks due to ill-health.

During her studies for her Doctorate in Education Georgina was diagnosed with breast cancer. Following extensive treatment for this she was then found to have secondary (stage four) breast cancer during the lockdown period last summer. She adapted her thesis to reflect this news. Through her writing, research and arts practice she included elements of her diagnosis and her thoughts around coming to terms with breast cancer.

Georgina is also dyslexic and received support from the University’s Disability Support team to give her the time needed to complete her thesis.

Her studies focused on contemporary feltmaking from both the perspectives of individuals and groups of women in a community of shared practice, such as a craft-makers group.

She explored the history of feltmaking and the learned traditions passed through generations and examined the often overlooked importance of the pocket in women’s history, examining pockets in patriarchy and the role they played in that women were not allowed to have them in their clothing and that they were denied the ability to carry items on their person.

Georgina found that women’s crafts, particularly focusing on feltmaking, can be used as a way to communicate and convey a personal journey and can enable members of a group of crafters to support each other. Women can use felt-making as a way to make sense of life-changing events and adversities and to begin a healing process by bringing comfort and a sense of community during times of turmoil. As well as following her own felt-making journey, Georgina connected with crafters across the world through the International Feltmakers Association and joined a Cheshire-based group, the Friday Felters.

She started the EdD in 2011 and had to pause her studies several times after a routine mammogram discovered breast cancer and a series of operations, chemotherapy and radiotherapy followed. Georgina said: “I had bad neuropathy in my hands and couldn’t walk properly following the treatment. It took a while to get my concentration back but I returned to my studies as soon as I could – I was over half way through and didn’t want to give up!

“I was fascinated by how a group of feltmakers worked – there’s no formal teacher each time and participants learned from each other. It was extremely interesting from an education point of view.”

Alongside the work of the craft-group, she also researched the history of the pocket and following an appeal through an International Feltmakers Forum she received more than 50 handcrafted pockets from across the globe including Canada and the Czech Republic.

During recovery from her first rounds of treatment, Georgina, who has always created her own art, found comfort and purpose in her own felt work and began making felt pictures and pockets. Telling her doctoral supervisors about this they advised that this aspect should be brought into her thesis. Georgina said: “I showed them my work, which I hadn’t created for anyone else to see, and they said it was so powerful that it needed to brought into the EdD. I recorded utterances to go with each piece describing how I was feeling and had them on display at the University’s Talking Bodies conferences with QR codes for each piece, so people could scan them and listen to my words.”

Plans for a full exhibition were thwarted when Georgina was taken into A&E shortly afterwards with aches, pains and spasms in her lungs. Stage four cancer was discovered in the rest of her body and ongoing treatment has meant she has been shielding at home since the start of the pandemic. She continued making artwork as a ‘catharsis’ and ‘way of processing what was happening’ while waiting to hear about her viva, which she passed before making her final submission.

Georgina, who also awarded a Senior Fellowship of the HEA (Higher Education Academy) recently, dedicated her thesis to her husband and children who supported her all the way through. She added: “When the email came through to say it had been accepted I was so excited. I wanted to prove to my children that no matter what the odds are you can still come through. It was one of my life goals and I was so proud to achieve it.”

Her favourite part of her role in the Faculty is the opportunity to give confidence to students to be able to teach Art as a subject in primary schools, especially if they have not studied Art themselves for many years. She also enjoys regular craft sessions and workshops on Zoom and held a weekly craft session for wellbeing for both students and staff from 2018 at the University until the pandemic hit in 2020. Through these activities, she hopes to inspire others to find joy and solace in the art of creation.

To find out more about Georgina’s creations visit https://www.anewfeltpresence.com/