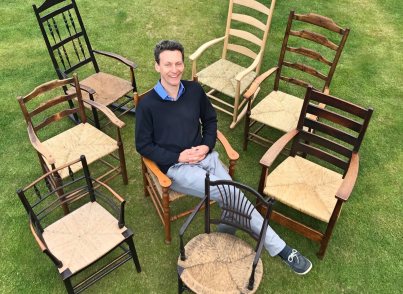 A great tradition of the Arts & Crafts movement is being saved and given a flourishing future as two young chairmakers prepare to open a workshop at Marchmont House in Scotland.

Lawrence Neal, thought to be the last UK craftsman earning his living from making rush seated ladderback chairs, had been looking to retire from his workshop in Stockton, Warwickshire, after half a century and had no successors.

But his legacy, as the keeper of furniture-making practices dating back to the 19th century, is now secure.

On 1 July Sam Cooper and Richard Platt will open the Marchmont Workshop, a new centre that has been specifically designed and equipped to continue a craft that might otherwise have faced extinction.

After completing two years as apprentices they will be the sixth generation, in an unbroken line, to make chairs to specific designs handed down from Arts & Crafts luminaries such as Ernest Gimson, Edward Gardiner and Philip Clissett.

Richard, aged 25, a music graduate who has made everything from guitars and turned wooden bowls as a hobby, sees the new venture as being much more than a business.

He said: “It’s quite scary and a little daunting to be handed the reins of a tradition that goes back to great names like Gardiner, Gimson, Clissett and the Neal family.

“We are very aware that we’re not just chairmakers, we are custodians. Our aim is to reinvigorate this craft – to teach people about its history and encourage others to take it up.”

The pair will specialise in 10 types of side and armchair, plus three types of rocking chair, each one learned from Lawrence and with its own particular story and origins.

However they intend to innovate, not least by experimenting with woods such as sycamore and beech that are prolific in Scotland and also hope to put an emphasis of sustainability.

Rush seated ladder back chairs were popular with the Arts & Crafts movement because they embodied its values of fine traditional craft making, inspired by nature and offering practicality, simplicity and beauty.

Sam, aged 27, a former scuba diving instructor who has loved carpentry since secondary school, was working for a logistics company in London when the apprenticeship opportunity came up.

He said: “I used to bunk off other lessons to spend all the time in the tech lab to spend time doing woodwork and have been doing it as a hobby ever since. I really wanted to find a way to turn it into a career – so when this came up it was a dream come true.”

Both appreciate the idea that the furniture they make will be cherished for generations and will find places round dining tables and in living rooms in everything from country homes and farmhouses to upmarket metropolitan flats.

They already have orders from every part of the country from Truro to Edinburgh and they have been shortlisted for the 2020 Heritage Craft Association Trainee of the Year award.

The apprenticeships and workshop were set up by Hugo Burge, Marchmont’s director, who has restored the mansion, with his Father Oliver Burge, near Greenlaw, with the idea of making it a home for artists and makers.

Hugo said: “Many of the great names of the Arts & Crafts movement and British design created their own version of rush seat chair – including Mackintosh, Lutyens, Voysey, Morris, Heal and Russell.

“They are a truly important part of our craft history. When I discovered that Lawrence Neal was planning to retire and had no successors I thought it would be a tragedy if this understated craft, with such a long history, was to be lost.”

Marchmont House already has a collection of around 150 antique rush seat ladder back chairs, possibly the best in the UK. The new venture means it is playing a role in the future of the craft as well as preserving its past.

A series of estate buildings are being refurbished to create seven units for artists and makers, with the Marchmont Workshop being the first to open.

Lawrence Neal, who still takes some commissions, echoed Hugo’s feelings: “I always hoped this craft would have a life beyond me, that there would be someone to take up the torch and carry on the trade. If this was lost we would be losing part of our heritage.”
A film The Chair Maker: Lawrence Neal can be seen at https://vimeo.com/283958058