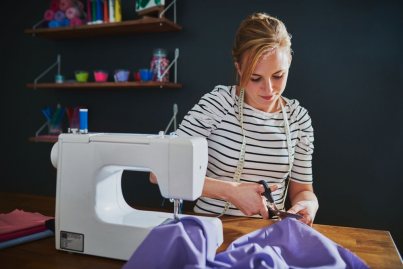 New research from Simplicity New Look has found that sewing is becoming one of the nation's favourite pastimes.

The results revealed that 1 in 4 18-30 year olds have taken to learning the skill in the past 12 months, which could be an outcome of popular TV shows, such as the Great British Sewing Bee and the Great Interior Design Challenge.

When it comes to helping us unwind, 66% of Brits claim it is one of their top three favourite activities, with 82% admitting they find it more relaxing than watching TV. 28% even revealed they have invested in a sewing machine in the past year.

79% of haberdashery enthusiasts have learnt their skills online as opposed to through school or relatives with sewing skills.

1 in 10 sewing enthusiasts have even turned their heads to making profit out of their skill by starting their own business.

37% of fashion forward and style conscious Brits admitted to preferring to upcycle existing clothes and home furnishings over shopping for new purchases.

Jeremy Taylor, sales and marketing director at Simplicity New Look, said: “Sewing has been growing in popularity for a number of years, but it’s really interesting to see just how many Brits now consider sewing to be a fashionable skill and are taking up the hobby in order to upcycle their existing clothes and home furnishings.

“What’s especially poignant is that the skill is seeing a resurgence amongst 18 – 30 year olds, a possible result of the upcycling furniture trend, alongside the rise in celebrity sewers, such as Holly Willoughby, Eva Longoria and Chris Martin.

“Given technology and gadgets are such a big part of modern lifestyles, it’s great to see that so many people are choosing a more traditional pastime. It’s even more impressive that British sewers have even taken their skill to the next level by starting up their own business.”