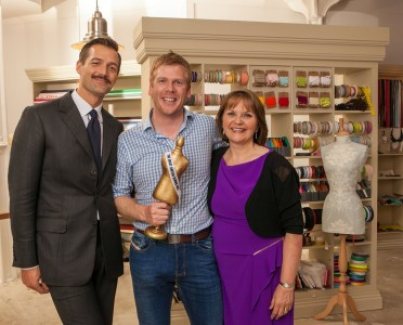 If you ever find yourself, of an evening, wistfully flicking through the TV channels in search of a little inspiration to fire you up for another day’s trading, you’re not alone. When series three of The Great British Sewing Bee departed from our screens this spring, it left the three million viewers who tuned in to the final hungry for more. But while most were captivated by the unfolding dramas of wonky seams, dodgy zips or – heaven forfend – uneven topstitching, anyone involved in buying and selling the materials featured will have been engaging their business brains.

Showcasing stock
For, like its sister show, Great British Bake Off before it, GBSB is making commercial waves. When the show first aired in 2012, pulling audiences of 2.7m to its BBC2 final, John Lewis reportedly saw a 54 per cent rise in dressmaking pattern sales. “‘The walk away dress’ pattern used in episode three of [the last] series was sold out within a few days lifting 533 per cent compared to the previous week,” explains Vanessa Bowerman, haberdashery buyer for John Lewis. “We just couldn’t keep up with the demand. It really highlights the importance of ensuring products used on the show are available. On average we see a 50 per cent uplift week on week.”

John Lewis doesn’t just record a general lift in sales, but boosts to individual items featured on the show too. “The effects are always very clear depending what is used in the Sewing Bee each week,” says Vanessa. “For example the invisible zip used in the first week’s show was instantly a best seller, lifting 150 per cent on the previous week. Last year we also saw a fantastic 100 per cent uplift in overlocker machines after the same episode aired.”

Big-ticket items have also benefited, with the high-street group recording a sales hike of 180 per cent in one line of sewing machines. The following year retail giant Amazon reported that sales of sewing category, including machines, had increased 50 per cent in the period since the show started. It also cites the ‘Sewing Bee effect’ as explanation for sales hikes in specific kit in the six weeks of this spring’s series. Hobbycraft credits the series with a 75 per cent year-on-year rise in sales of sewing machines, 38 per cent rise in takings on fabric and 13 per cent increase in demand for thread.

And it’s not just the big boys who have reaped the benefits. “We see a big increase in sales during the time Sewing Bee is aired,” says Lauren Guthrie, whose bricks-and-mortar fabric store, Guthrie Ghani, opened its doors to Birmingham shoppers in 2013. “We’ve also seen a lot of new customers who have been inspired by the show. I think it’s a fantastic benefit to the industry as it makes it appealing again in a more modern and approachable way.” Lauren’s perspective is perhaps unique; she and husband Ayaz Ghani dived into the shimmering waters of retail on the back of her success in reaching the finals on the first series of Sewing Bee. “It was an amazing experience and made me realise how much I really love sewing my own clothes; I really enjoy sharing that enthusiasm with customers.” Like many retailers she’s spotted the telltale signs of the ‘Sewing Bee effect’ on shifting stock that was previously gathering dust. “The biggest increase in interest has been general, but after contestants sewed with jersey in series two we saw a huge demand for jersey fabrics, which had previously not been that popular.”

Vanessa Bowman agrees – John Lewis sees a big lift in sales overall, but particularly in the products that have just been featured. “The popularity continues to grow each year the show is on and this year was no exception seeing a 26 per cent lift vs last years sales,” she explains. “However, it’s always a bit of a gamble as we are never entirely sure what will be featured.”

But Vanessa’s team are cunning with restocking plans. “We always try to stay ahead by focusing our efforts on the sneak preview at the end of each episode,” she reveals. “As a team we just need to ensure all our products are well stocked, available online and send out communication to all branches to ensure they too are supporting sales where possible.”

Class act
Perhaps most convincing are the stats from the Women’s Institute, which saw applications for its sewing courses swell by an incredible 588 per cent following transmission of the show’s first series. “The number of people attending sewing courses at Denman – the home of the WI Craft School – has increased considerably since The Great British Sewing Bee started in April 2013,” says the organisation’s Joanna Rayner. “This rise is in part a reflection of increased popularity of our courses in general, but it may have been helped by the GBSB bringing sewing and needlework more into the public eye. WI tutor May Martin’s involvement in the programme could have also played a part in drawing in more members to her courses.” Denman ran just three sewing courses a year previous to Sewing Bee. By the end of this year it will have delivered 32 courses.

Despite the increasingly-advanced techniques featured, the show’s potential to inspire entry-level sewers is seriously exciting. “It’s definitely had the effect of putting craft into the mainstream and showing people how easy it is to make their own clothes,” says Craig De Souza, director of the mighty Craft Hobby Association’s UK operations. “Customising has always been huge, but now people are looking at projects you make from scratch and saying, ‘Actually, I’m going to give that a go’. It’s brilliant for the industry. Okay, the contestants featured have a certain level of skill, but they’re just normal people: your mum, my mum, your nan… just everyday people who are having a go.” With contestants from all walks of life and finally a male winner, the demographic is spreading.

The impact has been noted at Alice Caroline, an Tewkesbury-based e-haberdashery specialising in fabrics by Liberty. But whilst sales of the iconic prints have peaked after being featured in on-screen projects, a broader effect has been hard to quantify. “It’s really difficult to say whether we have an actual upturn in sales as a direct result of the Sewing Bee,” says the store’s Anna Saunders, “but there is something to be said regarding the national trend of ‘making’. Shows like this are a fantastic way of proving that it’s possible to make clothes even with only a little experience. Long may it continue.”

While the sun shines…
Amen to that. For whatever your stance on Patrick’s moustache, Claudia’s asides to camera and May’s reserve in the face of some serious abominations, we can all agree Sewing Bee is a Good Thing For Business. But will it continue? Love Productions, the programme maker who produces GBSB and Great British Bake-Off for the BBC, told Craft Business it was “too early” to confirm or deny plans for series four. May Martin was a little more forthcoming, revealing, thrillingly, that filming will resume in February next year.

Plenty of time, then, to strategise for the sales opportunities presented by the show’s return. “A real strength of small businesses is our ability to quickly adapt and take advantage of unforeseen opportunities,” says John Allan, national chairman of the Federation of Small Businesses. “Small retailers are ideally placed to react quickly and set up inviting shop displays welcoming first-time customers off the back of this TV success story. The challenge will be turning curious Sewing Bee fans into lifelong loyal customers.” And that’s where the real contest begins.