Jenniffer Taylor wants you to join The #sewingrevolution! 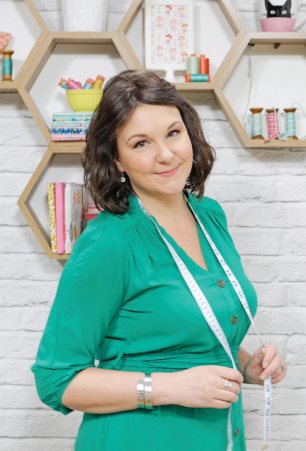 Angela Sara West talks to inspirational sewing ambassador and author, Jenniffer Taylor, about her empowering sewing journey, the new ‘Tiny’ inspiration in her craft life, book number two, and her continuing mission to get the nation sewing

Self-taught seamstress Jenniffer Taylor’s sewing journey didn’t start with a simple project - it began with her wedding dress, and a little help from textile artist, Ineke Berlyn. “We designed it together,” explains Jenniffer. “And I designed and made my own ‘lace’ to lie over the top of the dupion silk dress using a paper laminating technique, with paper, organza and a soldering iron to create the scalloped edge, ‘cutting’ it with heat.”

The success of her very first sewing project not only gave Jenniffer her dream dress, but also the sewing bug, seeing her take on project after project, leading to her place as a competent and confident contestant on a certain well-known sewing show in 2014. Unbeknownst to Birmingham-based Jenniffer, her husband, Kirk, had also been busy behind the ‘seams’… “If it wasn’t for Kirk, I really wouldn’t be where I am now. He was the one who applied for me to appear on the ‘Great British Sewing Bee’ - without telling me! So, you can imagine my shock when I got the call to come to the auditions!”

With only a year’s worth of sewing experience under her belt, she hugely impressed the popular BBC Two’s show’s judges and the nation with her sewing confidence and ability, shooting from not having sewn a stitch just a short time ago, to sensational sewing fame.

Battling her way through to the buzzing show’s quarter final was just the beginning of Jenniffer’s inspirational journey. “I was completely overwhelmed by the viewers’ response to me being on the show… people of all ages contacted me to say how much I had inspired them to pick up a needle and get sewing. From that point on, I knew this was something that I wanted to continue to do as a profession.”

Jenniffer started setting up her #sewingrevolution workshops, based around upcycling and dressmaking, in and around the Midlands. Fast forward a few years and #sewingrevolution has gained momentous momentum through live demonstrations, featuring in sewing magazines, at exhibitions and events and the launch of Jenniffer’s first book ‘Girl with a Sewing Machine’, published by Search Press. An influential presence at events and on social media channels, she’s now a familiar face on TV, too, alongside demonstrating and teaching nationwide, including hosting workshops at Brenda Killigrew Sewing Studio.

She has also worked alongside many industry leaders, including Create and Craft TV, John Lewis, Ariel, Korbond, Immediate Media and Vlieseline, with whom she has collaborated on projects and events. Jenniffer’s also appeared on BBC One’s ‘Right on the Money’ and radio shows as a sewing expert and upcycling advocate as part of the #loveyourclothes project, which encourages people to think twice about throwing away unwanted clothes and items, and to revamp and refashion them instead.

And her refreshing, no-fuss attitude to sewing is certainly working, inspiring her numerous followers and readers to give things a go. “Sewing, for me, is such an empowering tool. I know that my confidence has grown with each new project, and this is something that I want everyone to experience. Upcycling is a fantastic way to get you started. With a basic sewing kit and clothes you no longer wear from your wardrobe, you’re ready to get stitching and stop clothes going to landfill! Seeing people’s confidence flourish and grow with each make is magical. This is why I say ‘creativity is contagious’ – pass it on!”

Following the success of her first book, Jenniffer is close to completing book number two, which will be published early next year. Similar to her first title, making clothes from scratch with only your body measurements is very much at the heart of the second book. “Without giving too much away, I want to give the reader the opportunity to design a garment the way they like, and make it with just their body measurements. Kind of like a sweet shop, you get to pick exactly what details you want and then get creating!”

What’s more, Jenniffer will launch her first range of sewing kits and patterns at the Creative Craft Show at the NEC in Birmingham in June, where she will also be running an origami shopper workshop using sustainable interlinings.

She’s also busy creating her first baby, due at the end of July. ‘Tiny Taylor’ seems to bringing a new source of inspiration. ‘With my changing body, it’s just re-enforcing why I love sewing so much. With my ever-diminishing wardrobe, being able to create clothes to my size in the style I want has been a life saver. Not to mention the ideas I have for Tiny Taylor… Not that I’ve had much opportunity to sew lately with everything going on, but I’m hoping when ‘Tiny’ arrives I can set aside some selfish sewing time.’

As for THE dress, it’s gone on to live a life of its own… “It featured in Ineke Berlyn’s 2013 book ‘Collections’ because of the technique we used, and has also been on tour with her at a number of exhibitions around the country and abroad!”