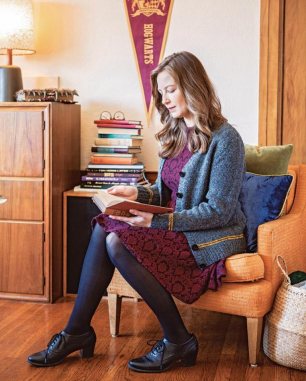 The US publisher Insight Editions approached me and asked if I would write and create Harry Potter Knitting Magic. I have written nine books prior to this one and have almost 600 published designs. I also worked at Vogue Knitting and in publishing for many years, and prior to that I went to RISD to study film, animation, and video. It was this magical combination of having a film background and a publishing background with all of the connections that I would need to do this book justice that made them reach out to me. Originally, I thought the email was spam, because I have been waiting for so many years for someone to do an official Harry Potter book. Year after year I would think, “I really hope that I get asked to be a part of that and be asked to design something for it”. When that email landed in my inbox and after the phone interview, I was bursting with excitement and anticipation of getting started. I was honoured to be given the task of making this book.

There are so many fantastic and obviously handmade items in the Harry Potter film series. In addition to knitting there are lots of other crafts as well. I remember watching all the films for the first time and immediately looking at all the hand knitted things and thinking, “I wonder if I could make that?” I remember sitting in line for the first film (back when you had to camp out to get a good seat) knitting away and hoping there would be some knitting in the films, as there are in the books. I have no doubt that all the other knitters in the audience felt the same way!

I am a massive Harry Potter fan! Some of the items we decided to put in the book were obvious choices like the Weasley sweater, or some of the creatures. Being a huge fan of both the films and the books, I already had the history of reading and watching them multiple times and was kind of rifling through the library in my brain of what we could possibly put in this book. Like any good researcher, I also re-watched all of the films for homework.

This book is special for so many reasons, but one thing that was very important to us right from the beginning was that we had all skill levels represented. We have a handful of projects for each skill level in the book, and the idea is that a beginner knitter can start with one of the easier projects, then work their way through the skill levels until they can make everything. I have heard from so many people that even though they do not knit, they bought this book with the anticipation of learning how and working their way through the projects. That makes my crafty heart so very happy! I teach knitting all over the world, and my goal is to always help every knitter reach whatever level they desire in their crafting.

Just like any series, everyone has their favourite Harry Potter character. My favourite character has always been Luna because I see some of her in myself, especially as a fellow Ravenclaw. The nice thing about an entire universe being created for the series, is that there is someone for everyone to relate to. Whether you find common ground with a wizard, a Muggle, one of the professors, a creature, a main character, or a supporting one, I wanted to be sure that everyone found a project inspired by their favourite that they would want to cast on for immediately.

Harry Potter is loved worldwide, and non-knitters do not realize how many of us knitters there are. We are everywhere! Combining these two loves of Harry Potter and knitting was already a magical combination. There were also a few things that I’ve noticed are lacking in some of the books that I made a priority to include in this title. Size inclusivity was a big one. Not everyone is the size of a model, so it was very important for me to have a bust circumference all the way up to 70 inches. I also wanted our models to look like regular people, with multiple ages represented. We also have a wide variety of yarns, from yarns that every yarn snob like me will love, but also some affordable choices. I had also mentioned earlier the skill levels and that was really important to me as a knitting teacher.

I am incredibly proud of the group of designers that I hand-picked to be part of this book. They all have such incredible strengths and came up with such clever and wonderful projects, I was absolutely honoured to be in their company. I think we also have a really great collection of ideas in this book. We have things directly inspired by the film, we also have custom replicas, creatures, and home décor. There’s such a wide array of content that you could knit for years out of this book and never be bored.

Harry Potter is such a worldwide phenomenon and there’s this pressure of doing it justice, to not only the fans of the films and the books, but also the knitters. Things have to be knittable and interesting and fun, and you want people to need them. I have been blown away by the staggering amount of love and enthusiasm that this book has received.

Like any good fantasy series, I think Harry Potter is all about escapism. Even though they are wizards and we are Muggles, there’s a lot of similarities that we share. There is a reason why these films are still watched so frequently. I don’t think they will ever go out of fashion. Everyone finds a character they can relate to and love. I think you see something or realize something new each time you watch them. Now with my own children, I am seeing these films through their eyes for the first time and that has been such a delight as a family to pile onto the couch and watch them together. My oldest is nine and is really getting into it.

I have curated what I think is an amazing collection with an absolutely talented and fantastic bunch of designers, and have my personal favourite projects. I think I know which will be most popular, and I’m usually pretty accurate in my predictions because this is my 10th book. But sometimes things surprise me that I think may have been truly popular and are not, or vice versa. One of my favourite things during the release of a new book is seeing what rises to the top.

One thing that was difficult during the creation of this book was to keep it such a top-secret project. With myself and so many designers involved, we are all pretty active on social media. To not be able to talk about what I was working on for over a year was a challenge, and a challenge that I passed on to the designers as well. Getting to finally talk about it on Instagram and Facebook and all of the social media outlets was amazing to watch how quickly it blew up. The sheer excitement and pre-orders for a book that no one outside myself and my publisher had seen completed had me speechless. Yes, I am the author of this book and I have my hands on every single page, but there is no way this book would be as special as it is without my incredible publisher and all of the designers who worked on it. It truly takes a village and they will always be my Potter family.

Why have Pavilion decided to publish this book years after the Harry Potters films were released?

“The Harry Potter films are classic, with new generations of fans discovering the enchanted world of Harry, his friends and foes. We are very thrilled to publish what is the first official Harry Potter knitting book, something many knitting fans have been waiting a long time for.”

Do you have any statistics regarding how many copies this book has sold so far?

“Harry Potter Knitting Magic has been hugely popular and went straight into the UK Non-Fiction Top 20 charts. The book has been published in several countries and it’s great to see knitters from all over the world coming together and sharing pictures of their creations from the book on social media under the hashtag #harrypotterknittingmagic.”

What qualities does Tanis Gray bring to the table as an author and a designer?

“Tanis has a long-standing reputation in the knitting world with over 500 published patterns to her name and brings her amazing design skill to several projects in the book. The book features patterns from a range of world-class fibre artists, so there’s a really nice mix of pattern designs to suit all tastes.”

What advice would you give to retailers who are looking to stock this product?

“There’s a perennial interest in Harry Potter. Fans of the films will immediately recognise the Harry Potter logo, so keeping the book visible in the shop or in a window is a good start. It’s also a good idea to have yarn available for making the projects so that knitters can buy the book and materials all in one go.”