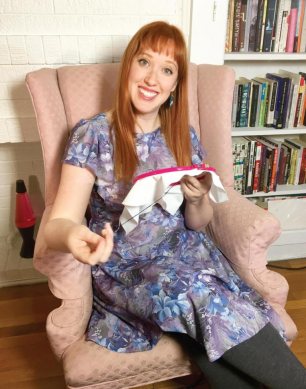 With cross stitch officially cool again, Angela Sara West catches up with the stitching supremo who specialises in cheeky, subversive and pop culture cross stitch, and discovers how Stephanie Rohr, aka stephXstitch, is smashing the patriarchy, one stitch at a time

Crafty activist? Want to remind others that ‘a woman’s place is in the revolution’? That’s exactly what Stephanie Rohr is doing with her first book, ‘Feminist Cross Stitch: 40 Bold & Fierce Patterns’.

Compulsive Chicago-based cross stitcher Stephanie Rohr grew up watching her mother and grandmother excelling in the craft. “When I was around seven or eight, my mum bought me a kid-friendly kit that consisted of a plastic grid, yarn and a big plastic needle,” she explains.

“I loved it, and soon moved on to a real needle, fabric and thread. But, as I got older, the more traditional pattern designs didn’t appeal to me any more. I then forgot about it for 20 years.” But her first craft love came calling and Stephanie got back into cross stitch as a hobby, along with a way to create unique gifts for family and friends. “I decided to try my hand at designing my own patterns with a snarky, funny and feminist edge to them. I especially get a kick out of making traditional samplers with naughty words and pop-culture references.”

Stephanie declares that cross stitch, once dismissed as mere “women’s work”, is now being acknowledged as both an art form in its own right and a form of expression. “It’s a way for crafters to express their opinions, show support for marginalised groups and protest.” She started her ‘subversive’ cross-stitch career in 2010, revving it up after the 2016 presidential election. “I started out with graph paper and coloured pencils, and finally moved up to cross-stitch design software so that I could make my patterns available as easy downloads for customers.”

Using this traditional method to create sassy and revolutionary wall art and handmade gifts, her vintage-inspired, ‘in-your-face’ cheeky creations also reach back to the classics (such as the Shakespearean quote from A Midsummer Night’s Dream: “And though she be but little, she is fierce”) for her feminist-themed patterns boasting edgy slogans and sharp one-liners. Whether it’s her reminder that “the future is female” or a mischievous acronym you’ll find hilarious, edgy slogans and clever one-liners that make fabulous wall art or wonderful handmade gifts. There’s no messing around here – Stephanie gets straight to the point!

After a couple years of creating feminist and more political patterns exclusively, this rebellious fibre artist has recently been making a return to more light-hearted and “silly” pieces. “Some of them feature NSFW language as well. I think art can be uplifting or political, but it’s also important to just have fun sometimes. I’ve also made a pledge to myself to make some cross stitch that’s just for me, using other designers’ patterns. The newest thing I’ve tried is cross stitching onto non-traditional objects, like tote bags or even metal peg boards.”

Best known in the craft world as stephXstitch, her Estsy Shop of the same name is home to her original handmade, modern cross-stitch art, patterns and kits. “I’m the smallest of small businesses. This is a one-woman operation and lots of time and love goes into each and every one of my handcrafted pieces and original designs. I pride myself in excellent products and customer service.”

She strongly believes that customers deserve to see a stitched version of exactly what they will be purchasing. “All of my finished pieces are originals, designed and hand-stitched by me. They all come finished and framed and ready to hang on your wall. I only list pieces that are already finished, so they can be shipped the next business day.” Stephanie also offers full cross-stitch kits. “These include the pattern, instructions, and everything else you need to do-it- yourself. They’re great for first time stitchers, or as gifts for the avid cross stitcher in your life.”

This determined one-woman-band - who alongside being a proud crafting feminist, is also a theatrical actor and director, musician and teacher - recently became a best-selling author, too!

Got something to shout about? If you’re looking to make a statement, why not draw inspiration from irreverent Stephanie’s first (and bestselling) book ‘Feminist Cross Stitch: 40 Bold & Fierce Patterns’? Published by GMC Distribution’s client publisher, Lark Books, the boundary-breaking title hit the shelves in February. “I’ve been designing cross stitch for about ten years and had always dreamed of writing a book,” Stephanie explains. “I was initially approached through my Etsy shop by Lark Crafts to contribute patterns to a book that would be a collection of different designers. Instead, I proposed a feminist cross-stitch book of my own and, to my delight, they made an offer!”

Her bestselling book boasts 40 hip, vintage-inspired cross-stitch patterns for crafty activists, with an illustrated basics section to get readers started, information on materials, tools and techniques, along with details on how to frame their fabulous finished pieces.

She has a few famous fans, although on that subject, at least, her lips are sealed. “I’ve had a couple of celebrity buyers of finished pieces, but since they bought them privately, I don’t think I can share names. One very cool honour was having one of my pieces featured on Comedy Central’s show ‘Key & Peele’. I like to imagine that Jordan Peele or Keegan-Michael Key took it home from the set. In my fantasy, they actually fight about who gets to keep it!“

You can catch Stephanie selling her feisty creations in-person at art fairs and crafts shows in the Chicago area. She also teaches BYOB cross-stitch classes through Dabble.com. “You can embrace your sassy and subversive side or go for a more traditional stitch. Either way, you’ll need a good foundation and, in these classes, I take you through the basics of cross stitch; reading the pattern, selecting materials, threading the needle and, of course, the stitching itself. I provide all of the necessary materials (a full StephXstitch kit comprising fabric, embroidery hoop, needle, embroidery thread, written instructions, handouts and the chosen pattern) for your first cross-stitch project and we then stitch it together.”

Stephanie says she loves teaching in person and sharing her love of cross stitch with others. “It’s rewarding in the moment to see someone who was initially frustrated start to ‘get it’. There’s usually a point where the whole room goes silent as everyone gets into the rhythm of stitching. Another great reward is hearing from people afterwards, saying that they’ve found a new hobby, or seeing photos they send me of their finished pieces. I even hear from people who open up and tell me that stitching helps relieve their daily stress and anxiety, which means a lot to me.”

The secret to her success?

“For me, it’s always been to just keep producing new work. For example, when sales were down in 2016 I set myself a challenge for the next year. In 2017, I resolved to release a new design every week of that year. That meant having a new idea, designing a pattern, completing it and photographing it every week. I turned it into a giveaway on social media. It really got things back on track.” She keeps things fresh by challenging herself to keep evolving. “Even if it’s something as simple as breaking out of the colour palette I usually gravitate towards. If I get really stuck, I remove myself from stitching completely for a little while. I go for a walk outside, listen to music, go to the theatre, play my piano. Inspiration tends to strike when you actually stop thinking about it for a moment.”

She also always tries to “genuinely interact” with her customers and social media followers. “If you’re willing to listen, people will tell you what they want. Another thing is to actually not look at other people in your field as competitors. I’ve made great friendships with a lot of other cross-stitch designers. Promoting each other usually ends up being good for everyone. There are so many different styles and personalities, I truly believe there is room for everyone. It’s a very supportive community overall.”

With over 11,000 faithful followers, she says it’s “rather surreal” to have a large following on Instagram. “It definitely grew very slowly over the years. I’ve always been more focused on actually interacting with people than on a number. It’s a learning curve and you start to feel much more responsible knowing that whatever you post will reach a large number of people. It also tends to attract some trolls when I’m posting feminist content, which is never pleasant. But you learn to delete, block and not engage. The vast majority of the interactions are positive.”

How does it feel to be an influencer? “When the endorsements start rolling in I’ll let you know! But, kidding aside, I’ve had the honour of participating in a lot of local art shows and craft fairs in my home city and the best reward for me is knowing that thousands of cross stitchers all over the world use my patterns to make their art.”

With cross stitch making a major comeback, Stephanie’s seeing a few trends coming through. “There’s much more experimenting with colourful fabric; people stitching on black, red, etc. I’ve also been seeing more creative floss choices, like metallic, glitter and even glow-in-the-dark!” What does she love most about the craft? “I’ve always found cross stitch very relaxing and satisfying. I also love the meditative and therapeutic benefits of stitching. I like the grid and the symmetry of it, and even enjoy the counting. I love the feeling of seeing a picture form slowly out of the little x’s. I also love how accessible it is as a needlecraft. I think it’s easier for beginners to pick up since they have the security of a pattern and, to begin, you only have to learn one stitch.”

Her proudest creation? “Definitely the ‘Rosie the Riveter’ piece, which is featured as the last pattern in my book. It’s the most detailed piece I have ever made and took me the longest. Stitching realistic human faces is a huge challenge, and I had to scrap it and start over many times.”

With her self-described “sassy, colourful and craftivist” style, most of her designs are very simple and feature the traditional cross stitch and back stitch. Her top tips for beginners? “I would recommend getting a kit, which comes with a pattern, instructions and all of the supplies you’ll need. Start with something simple but, more importantly, something you LOVE and really want to make. It can be slow-going at first so, if it’s a design or phrase you really love you’re more likely to stick with it. For more experienced cross stitchers, I would say try using a stand and stitching two-handed. That was a game-changer for me! Another real game-changer was the ‘loop start’, which allows you to start a new thread without using a knot and keeps your project smooth.”