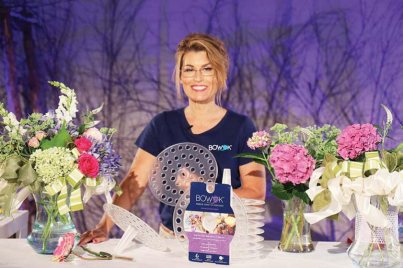 Deanna Russo, founder of Bow K and winner of the Craft Business Awards 2018 Best Start-Up, talks to us about her product, business and weddings.

It’s a bit of a jump from operating theatres to a craft business but that’s the leap that Deanna Russo made.

Deanna, whose background was as a medical device sales operative selling pacemakers and implantable defibrillators, came up with Bow K after attending her best friend’s bridal shower and is now operating her own business.

She said: “Bow K began out of my own personal frustration with a long standing wedding tradition. As my friend’s maid of honour, I was tasked with creating a ribbon arrangement during her bridal shower. I was given a paper plate and a pair of scissors to work with. Using the beautiful ribbons from each gift she received, the goal was to create a ribbon bouquet she could carry during her wedding rehearsal. I began by stabbing the paper plate to create slits to thread the ribbons. In more ways than one, the task was a failure.

Each ribbon and bow that was added caused the paper plate to bend under its own weight. What was supposed to be a beautiful bouquet of ribbons and bows to celebrate the love and happiness that surrounded the future bride ended up looking like a jellyfish!

“I knew there had to be a way to improve this decades old tradition, allowing us to say goodbye to the paper plate and scissors for good. Thus, the Bow K was born.

“I got married, had my daughter, quit my job and when she was in kindergarten I said right I am going to do something with Bow K and I have been at it ever since.”

And for Deanna she had no problems bringing her invention to the marketplace, however there were other hurdles to cross.

She added: “I had no problem creating Bow K because we have some great designers and manufacturers here in Rhode Island. Getting people to notice the product was quite difficult – creating it wasn’t the hard part. Without having a huge marketing campaign behind it I had to market it myself to get people to notice it.

“The world television premiere launch was with Create and Craft TV UK, that was just a few months ago, and that was a huge success – it was a sell out and they have invited us back to do additional shows and future new products that we have in the pipeline.”

And it seems that Bow K has tapped into the increase in DIY weddings.

Deanna said: “The trend is definitely to incorporate some non-perishables into the bouquets, they add depth they last longer than the fresh flowers so Bow K can tap into a lot of that. What you have seen in the past year in wedding bouquets, for instance, is that they were very organic, flowing and lose but now we are seeing the trend completely shift and you see a lot more structure and elongated designs. So the Bow K provides a really good support system to get into those very intricate shapes. And it allows you to combine fresh and faux.

“If you don’t want flowers you don’t have to use them at all and you can just use ribbons, you could use some gorgeous silk flowers if you wanted, you could just use bows, you could use dried flowers, there are so many more options available to you and the nice thing with the Bow K structure is that you can wire anything into a bouquet. So if you have a little photo frame that you want to wire in that you can peek at during your wedding or put on the table you can. For centrepieces you can put balloons on it and tether it to it I have seen people do bridge bouquets with it.

“They put little pouches in them to put things in like lipsticks and family heirlooms they tuck it underneath in a little pouch and people cant see it because the bows hide it. You don’t want to be carrying around your purse during your wedding, so if you can hide a little pouch under your bouquet then that’s ideal.”

And for retailers it is a good opportunity to upsell if they hold workshops within the store to demonstrate the Bow K’s use.

Deanna added: “Retailers can do it themselves and put it in store as examples of what can be done and upsell across it with having a range of ribbons and accessories that they can use as well.

There is a retail chain in the states, and I am not at liberty to say who yet because it is coming within the next couple of months, they are partnering with us and they are doing exactly that. They already offer design services for their silk flowers, but now they are going to offer Bow K services and incorporate the bows as a type of filler for these centrepieces and use their wire decorations. So its a great opportunity for them to cross merchandise.”

And Deanna isn’t resting on her laurels as she continues to innovate.

She added: “We have some great products coming out, including a wreath which I think is going to be a great addition, a smaller sized Bow K for flower girls and smaller centerpieces. We are coming out with Bow K tubes this month, Create and Craft will have them – they are going to be the very first to have those.

“The tube is great, its basically like a water tube and it can slide right into any of the holes of the Bow K. So you can use it for very many different things, you can add water to the tubes and put fresh flowers in it or you can use it to simply put things like cake pops, candy or anything on a skewer.

“So if you want to make a gift arrangement now you can mix bows with edibles, with flowers, with silk flowers, it really opens up endless opportunities to get creative with it.”